The Power of Thinking Big. 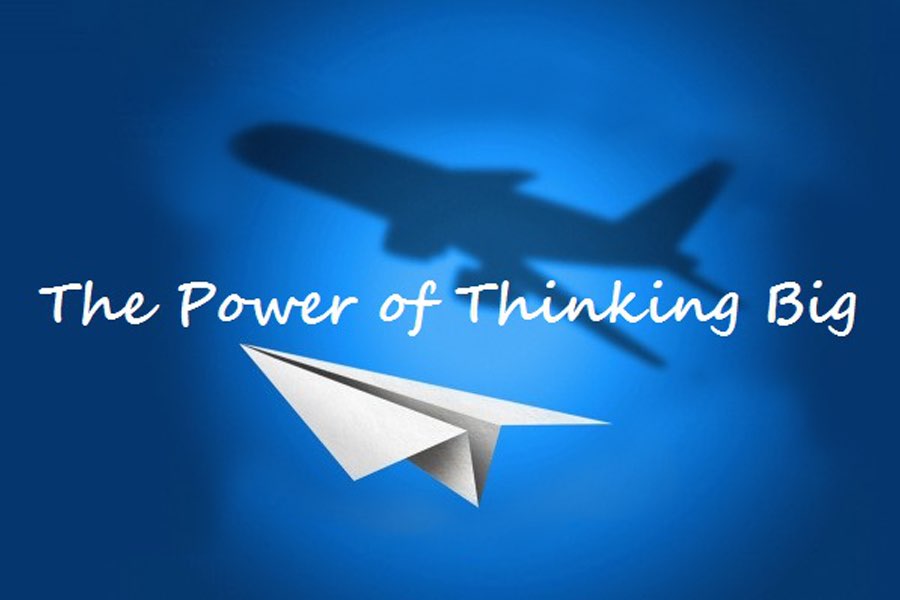 It all begins with a single thought…

‘Thinking Big’ signifies having the option to dream and envision what we can accomplish on a venturesome scale: without any points of confinement on one’s reasoning. It is tied in with being liberal, positive, imaginative and seeing open door in the 10,000 foot view.

When we underestimate what we can do in the long run, we underestimate the true ability we possess. Those who accomplish big prevent this mindset by setting greater goals for themselves. The bigger the goal, the more trivial is anything that might slow us down, and we can more swiftly provide solutions. The human mind has the ability to prioritize what is important automatically if the goal is sufficiently strong, large and well defined.

Big thinking can both galvanise one’s own thoughts and actions, and those of their team. In simple words as described by many top corporate individuals, it’s an audacious 10-to-30 year goal to progress towards an envisioned future. The hugely successful companies all had a focus on a single focal point of medium-long term effort. They had an organisation-wide goal which was clear and compelling, likely to be externally questionable, but not internally regarded as impossible. A true big audacious goal always acts as a clear catalyst for team spirit. It has a clear finish line, so the organization can know when it has achieved the goal. Many less successful businesses set goals that define what they aim to achieve in the days, months or years to come. These goals are often mostly uninspiring and pragmatic, such as “reaching revenue growth of 15% over the next three months.”

One only need to look at the Apollo program and its ambition of flying to the moon within a decade to see how it galvanized a country to do what was considered to be truly impossible at that time. In contrast, a lesser goal, failing to inspire enough people to make it happen, might never have been achieved. One must use this knowledge to motivate themselves and others.

Take advantage of economies of scale. In many cases, thinking big and taking action on large projects takes no more time and effort than working on a small project – but the results are much bigger and better, and the achievement is greater. It can be much easier to succeed by thinking big, rather than thinking small. There is less competition at the top of the scale than there is at the bottom, so it’s more advantageous to go large and reach for the stars.

Want to ‘Think Big’? Start by:

All innovations emerge from big ideas and creative thinkers will turn the world around. One’s power of thoughts are like leaders, innovators and achievers because they are free from limitations and small thinking. Great vision stretches the horizons, moving one further from the average and into the exceptional. Aim for bigger and better goals, and have the passion, drive and energy to make your dreams into reality.

The more one reach for, the faster one go. Big thinking gets big results!