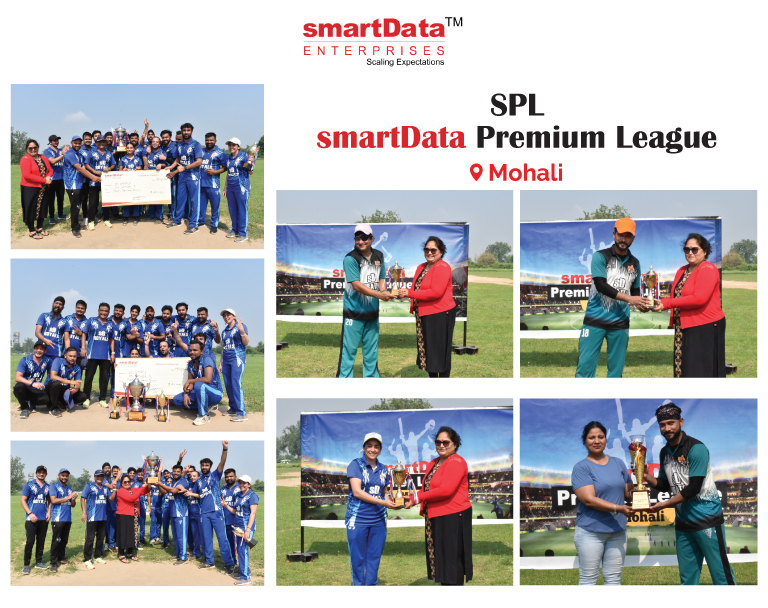 Every year at smartData when SPL (smartData Premier League) is announced, smarTians and their families gear up to participate. This year’s SPL was finally geared up again as a 2-year ban by the severe Covid pandemic.  We were all able to dress up in our jerseys and show our spirit as a smarTian team. Now it’s Time to Play the Game! Preparations start early and one can see smarTians out in the open exercising, practising batting and balling, and laying out strategies for winning. This is an overwhelming moment to compete with another team and play with full dedication.

The event started with auctions, where the team owners and icon players put forward their bids to get the best players in their team. Icon Players!!! Yes, you heard right. These are our star players who have been performing with the same exuberance since the SPL started and these are considered the most valuable players in our team that lead the journey towards success. Not only boys but girl players also can be seen competing the neck to neck and taking the crowd by surprise. The Audience is excited in watching the live performance of every player and cheers up for their favourite team.

It is the unpredictability of cricket that makes it so interesting. I saw people with back pain running, bruised legs pulling great shots and weak arms throwing the googly. Teams are giving their best in hard situations and prove themself as a part of smarTians. A 60 days tournament played across 3 branches, 15+ teams, 100+ participants, 200+ hours of play and endless hours of practice and preparation behind it. This is a great opportunity for players to prove their talent and come best over it. Sports give them a chance to cope with day-to-day challenges and achieve their goals.

The show stopper of the tournament was the playoffs. How was the josh? High sir!! Each team at its best fighting to make it to the finals. There are two teams in the finals i.e sD Royals and sD Pirates. Well, I am feeling glad to be part of sD Royals – this was my team and we are the winners of SPL season 13. There is a saying that be a gallant loser and win the heart of all which the opponent’s sD Pirate proved true. They really win the hearts of people and prove themself a good team with a high spirit. They might have lost the finals but their game won many hearts and many awards too. For me, the purple cap and the orange cap is the best player in the tournament.

When you want others to follow your ideology lead from the front. Leaders at smartData believe in fitness, health and fun at work. We indulge our employees in various activities that help them to come out of hard challenges and keep themself mentally strong and energetic. The ground is not just a place to showcase my talent but a pitch where I learn to perform under pressure, drive the mind and body towards #OneGoal and keep aside ‘me’ and become ‘we’. Pheww! Pandemic stress – no more, it’s cricket fever.

The fun never stops, stay right with us as the Champions League is coming soon.